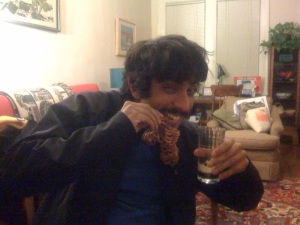 For about one half of one year now I have been included in a group of beer fans called Beer Club. We currently hold meetings every third Thursday, most often in Decatur. Though it started sparse and disorganized it has gained some semblance of purpose indicative of its members’ fervor. Now we have themes and homework. Last month was a beers of the Southeast extravaganza and overlapped with this article‘s release in the New Yorker. There was even a quiz on items in the article and the winner walked away with a one-of-a-kind pretzel and dental floss necklace (pictured). Conveniently, the November meeting also fell just after a trip to Asheville and their local beer haven Bruisin’ Ales. We stocked up on some of new favorite and anti-favorite North Carolina beers.

The idea, as I know it, is the brainchild of Ben and Katy Lovehardstein. Everyone involved brings one or two beers (one large bottle or two 12 oz of each) for everyone to try. Ben usually determines the order of tasting but based on the theme of the meeting this may vary. Everyone drinks the same beer at the same time and then votes on it. The scoring system is our own thumb down (-1), thumb level (0), thumb up (1) and then you total that beer’s score. Also everyone gets one double thumbs up (2) for the evening. I think we have tasting notes for all of our meetings somewhere but by the end of it they get lost.

Tonight is the December meeting of beer club and we’re focusing on seasonals (my suggestion for a festival of light[beer]s was offered a bit too late). Here’s the lineup so far.