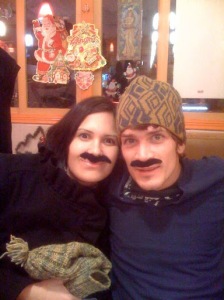 Over the weekend Lauren and I went to Brooklyn to visit Susan. While we were there we got caught up in a flurry of mustaches, otherwise known as Mustaches for Kids (perhaps the most disturbing name for a fundraiser ever invented). Susan’s boyfriend Jason was one of the ‘growers’ and raised money for public education. The competition extended for a month and had some strict guidelines about where and when you must shave. The Atlanta Chapter follows similar rules but donates money to a fund for childhood cancer research and prevention. In Brooklyn it culminated in a Stache Bash on Saturday with judges determining who would be king of the mustaches. They had to drink Guinness to see how much foam their mustaches could retain and also recite (or read) a haiku which they had written for the winter lip warmers or fox’s eyebrows, as it were, that now donned their faces. All in all it seems a good way to raise money while drawing attention to your cause. We’ll see if I decide to get involved next year at ‘the close of the growing season.’