It’s a important characteristic to have and one that comes to mind when you think of our lives on the scale of earth and climate. I think it’s a good reason to advocate for changes, or rather less (climate) change. In the same vein, this frightening and prophetic advertisement from the ironically named Humble Oil company found in a 1962 issue Life magazine made me think of it. 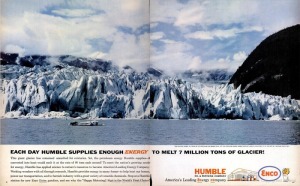 Tuesday night I went to see a sneak preview of the new Transformers movie. Save the fact that my seat was two away from the outside wall and one row from the front, it was pretty entertaining. At first I thought the perspective was going to make me ill, but ultimately it was the humor that was most disturbing. However, this is not a movie review (this is), rather it is a re-visitation of my fascination with advertising.

Transformers prominently features two major product lines that obviously made huge deals with the studio. The movie is like a big commercial, which is becoming more and more common these days. It’s almost exactly like this picture except that car shouldn’t be German. I don’t wanna ruin it for you but one’s a car company and one’s a computer manufacturer. Watching the movie I was more interested in some of the more subtle product use. For example, when the noticeably un-nerdy and, for some reason, Australian code breaker from the NSA decides which media to use when transferring the most important sound in the world (which disappears from the plot) how does she choose? Something tells me there’s more to her portable disk of choice than meets the eye. I couldn’t resist, and neither could the screenplay writers.

One particularly interesting aspect of this use of film as advertising, is its use for personal/group publicity. For example, when sports jerseys are worn in films, whose name will appear on the back. Did Clinton Portis’ agent get on the phone with Spielberg and make that happen? Or was it just because the story was taking place in Washington and they probably don’t sell a lot of John Hall jerseys? There’s a particularly interesting scene that gets at these deals in Thank You for Smoking. Nick Nailer is meeting with a Hollywood executive to strike a deal that will feature a lead man smoking in his next movie.

Maybe this sort of thing has been happening for ages. Actually, that is most likely the case. As long as there have been things to sell, there have been people trying to sell more of them to us. It is somewhat ironic that it took this movie to help me see – or at least motivate me to write about – how advertising is transforming entertainment.

John Hall’s agent… you’ll be hearing from me.