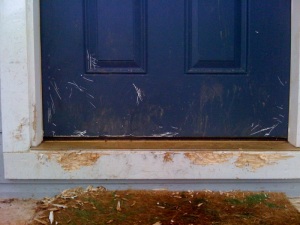 One morning last week something weird happened to us. At the peak of the storm around 6AM we heard a loud scratching at our door. When I looked out the glass I saw a big black animal clawing at the door and butting its head into the door, pushing it. It was a freaked out dog trying to break into our house. We stood inside for awhile trying to figure out what to do. The dog continued to claw and butt at the door and even tried to chew his way in. Maybe he heard how we adopted another local misfit pup. I finally ventured out on the porch thinking that I could not stand to lose this dog (with a collar) and find out where it actually belonged.

It was friendly but scared and would not take treats. I looked at the collar but only found a 2010 rabies tag, no ID. The tag had Dekalb Animal Service number on it and a registration number. Lauren had tried to call 911 but hung up after being tranfered for the third time and having to repeat our address several times. The animal services said they would come by at 8:30 to get the dog and we put him on a leash and went to work with him contianed on the porch. The picture of the damage is above.

We left a note for the animal services people and went to work. They called Lauren and told her that the dog belonged to some folks who live one street over and they returned him to his house. The owners were out of town and the dog freaks out in the lightning (obviously). The owners were given our name and were grateful that we found him and could get him back to them. They’ve said they want to help us with replacing the damage to the door.