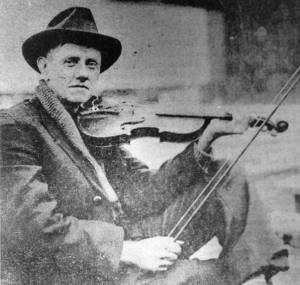 You probably didn’t notice it over the weekend. No, you didn’t notice, but there was a celebration for Fiddlin’ John Carson‘s 141st birthday. Complete with two live jam sessions. The first was held in Cabbagetown on the same streets (repaved and signalized) where John used to play. The other was held just down the street from us at the Historic Sylvester Cemetery where they played music on his grave (not sure if he was dancin’ in it).

The flier for the event proclaimed him the “Father of Commercial Country Music” and said he was Fiddler King for 55 years. Not sure who grants that title but it’s cool to live down the block from Royalty. Since we’ve been in the neighborhood we’ve always heard rumors of the country music legend buried down the street (nothing scary about that) and we’ve seen his plot get a couple makeovers. His family painted it white and added a rock that says his name on it (not a headstone though…?). Most recently they renamed the path leading into the cemetery Fiddlin’ John Carson Way. If you get a chance to drive by it I recommend seeing it.

The cemetery as a whole is really cool. It’s full of huge trees which makes it feel like a forgotten site in the woods somewhere but it’s right in the neighborhood. The foundation that share the cemetery’s name has done a great job of working on the grounds and the sites themselves. They right-ed headstones, picked up trash and flowered every plot. They are out there every weekend it seems and now it’s a nice place to walk dogs or just to take a walk yourself. This is a huge turn around, as I’ve been told that a few years ago the site was ‘the place in Atlanta to take a stolen car and set it on fire’. Today it’s a great addition to our neighborhood and once a year the site of a country/gospel jam.

One thought on “Fiddlin’ John Carson”