A lot has been said lately about Apple, in particular the company’s labor practices in China. More specifically, exposés on Foxconn, the electronics super-manufacturer that makes most of the gadgets we use everyday. There was this one from Charles Duhigg a the New York Times as part of a larger set on the iEconomy. It includes a great little cartoon on the iPhonehere. The paper detailed how the way that things are produced has changed and how that has ben accompanied by a departure of manufacturing from our shores. The figure below shows some of Apple’s most recent compliance numbers (taken from the Duhigg + Barboza article). 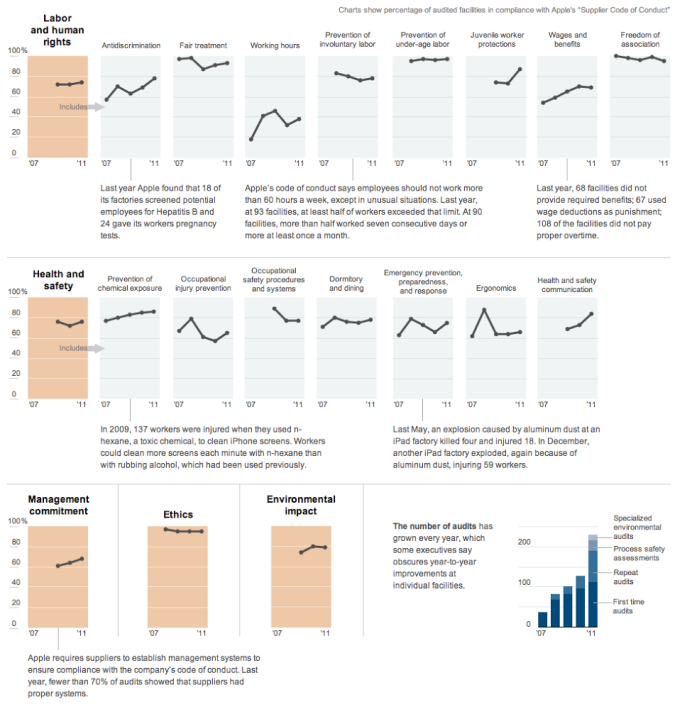 At about the same time This American Life had a show focused on the one-man monologue of a Mike Daisy, who had been to the Foxconn factory and interviewed workers. The story gives a much better picture of the human side of all this – talking about workers and their day to day lives, as opposed to the NYTimes piece which focuses on the business and the international market forces that drive such things. The story ends, and sort of begins, asking whether this will change anyone’s behavior. I am typing this, and you are probably reading this, on a machine made by the company at the center of much of this, and I continue to follow and purchase their products despite knowing that the people making the products most certainly can not afford to buy them themselves and are most likely being treated unfairly. But that’s a discussion for another time and place (Facetime me on your iPhone or iPad to discuss).

Today I found an article detailing the retraction of the story on This American Life. It turned out the Mr. Daisy included several fabrications in his uber-popular story about visiting the place of his iPad’s birth. In a reaffirming act of due diligence, This American Life broadcast a show detailing their investigation into how this could happen. At the end of the show they turn back to the reporters at the Times for the story they reported.

Regardless of the Mr. Daisy’s story, the facts about some of the workers in Foxconn’s factories remain true and verified in other reports. The falsifications in Daisy’s story relate to his anecdotes about who he ran into and what he actually saw at the factory. In truth, I think Apple is putting forth some effort to be transparent and act as stewards for the employees of its suppliers. They have a portion of their website dedicated to Supplier Responsibility in addition to their environmental actions. It’s more difficult to find audit results and actions for other companies like Samsung, Sony, and LG. But that may be a product of their success. Apple is teetering back and forth with Exxon for the title of the world’s most valuable company and yesterday announced that they will take some of their cash ($100B) and start paying dividends on their stock.