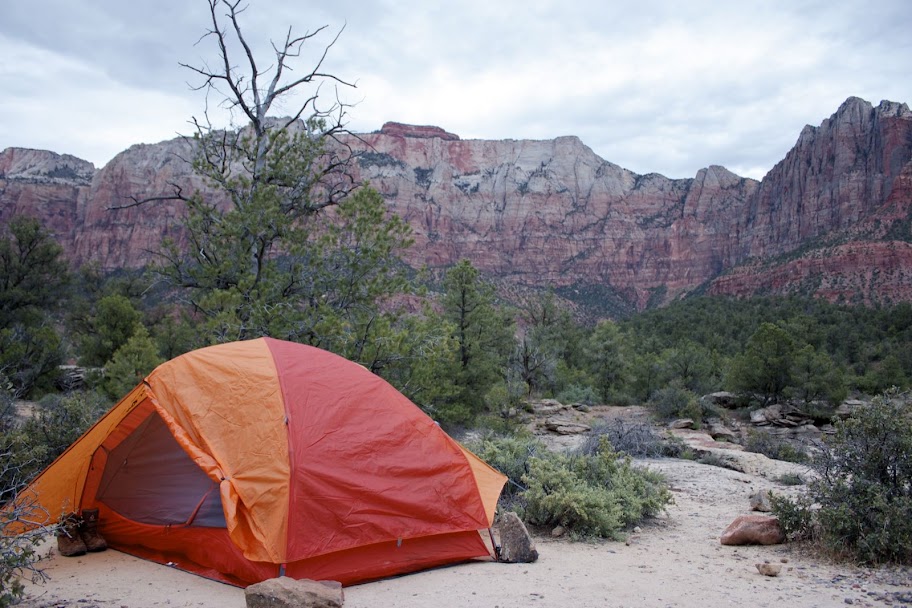 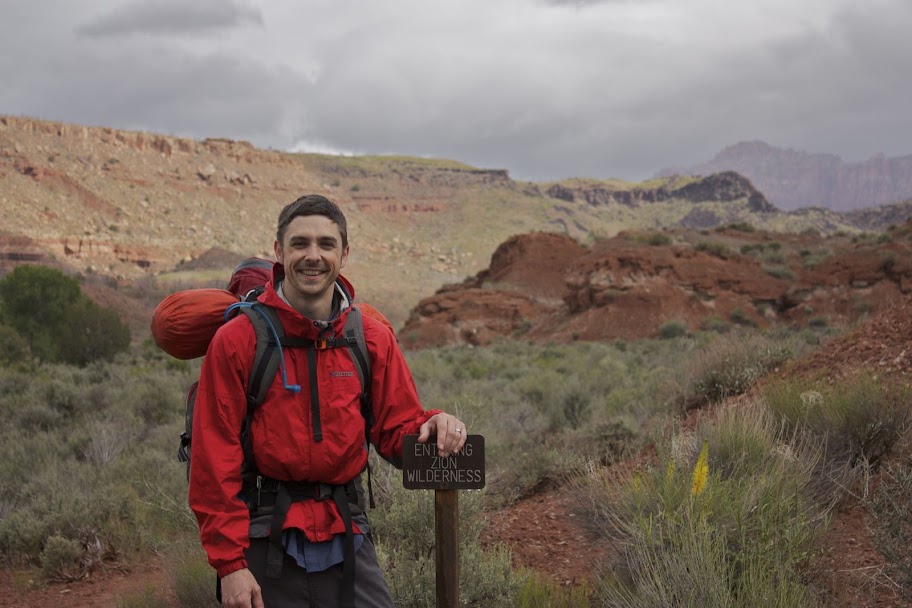 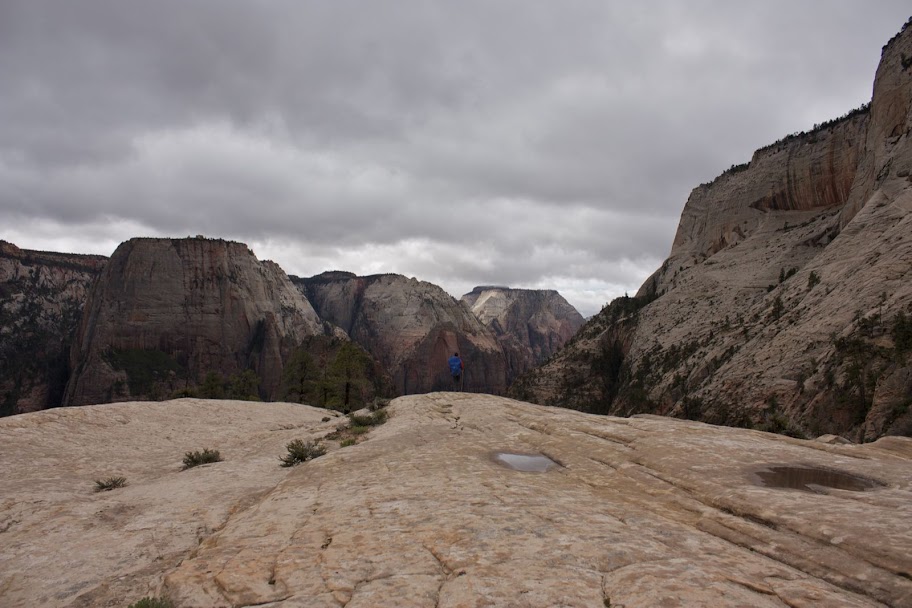 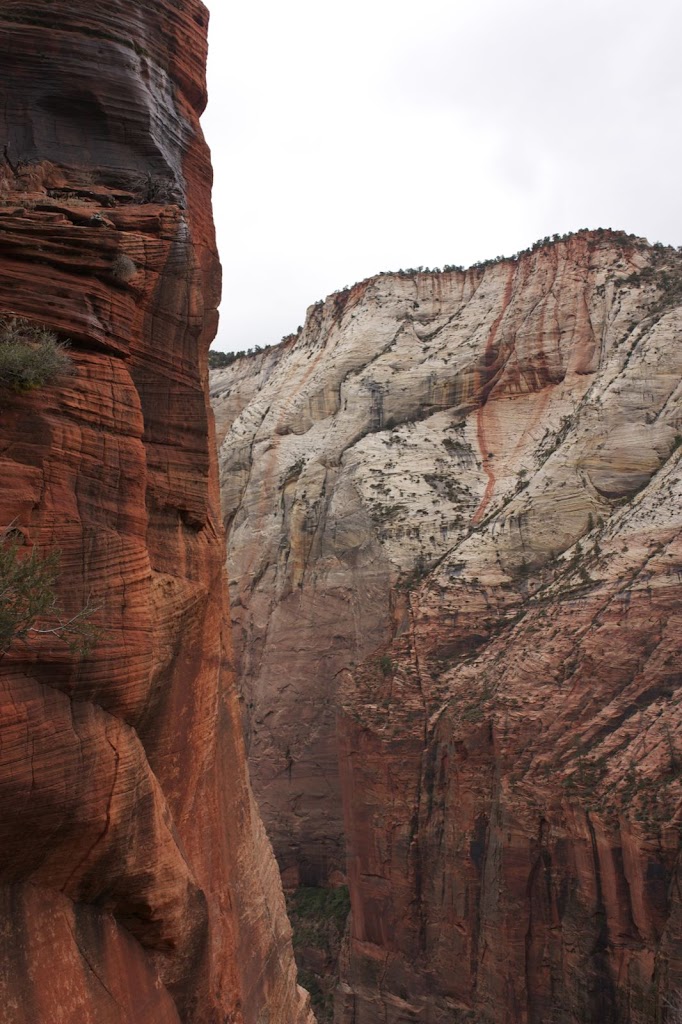 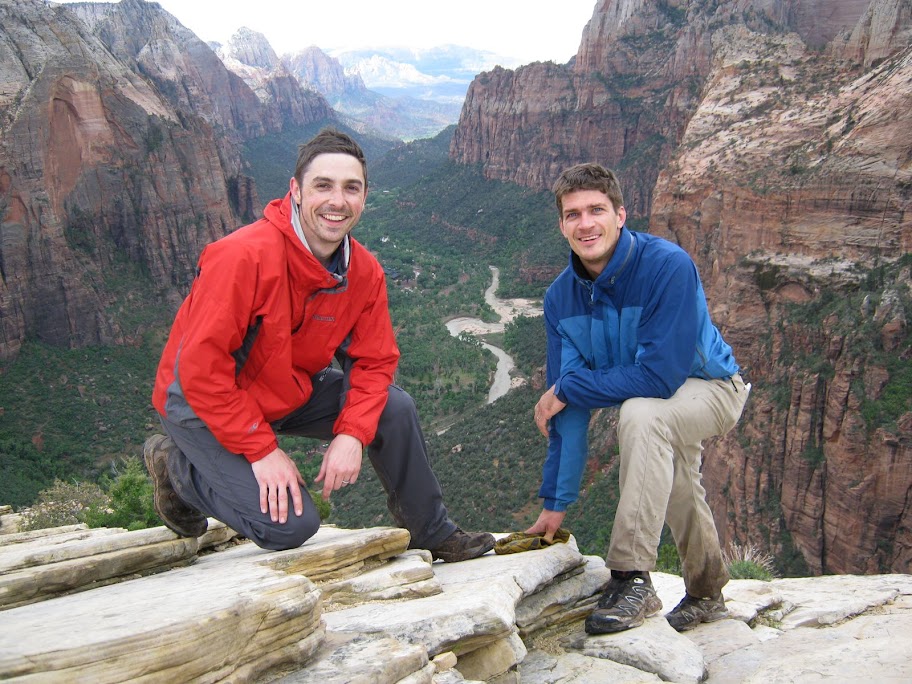 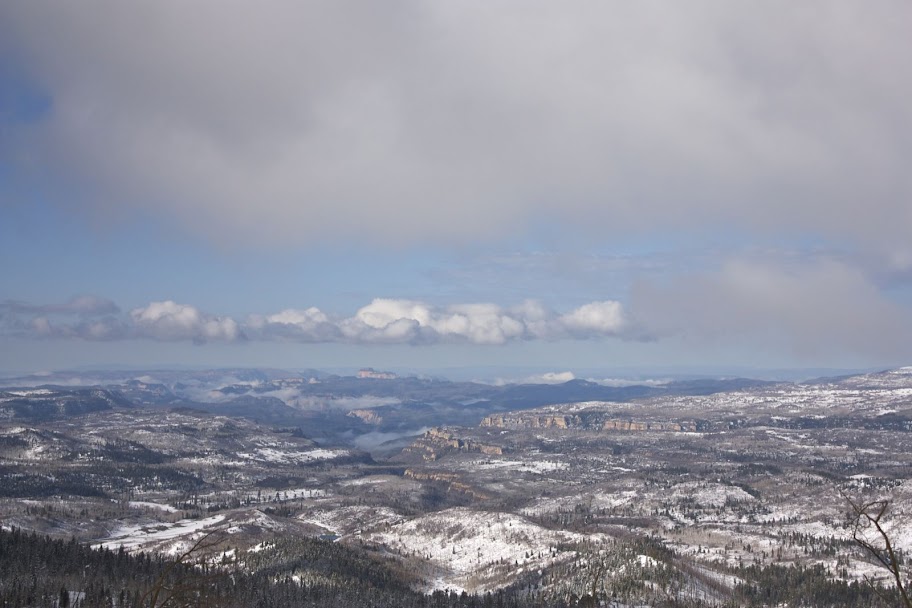 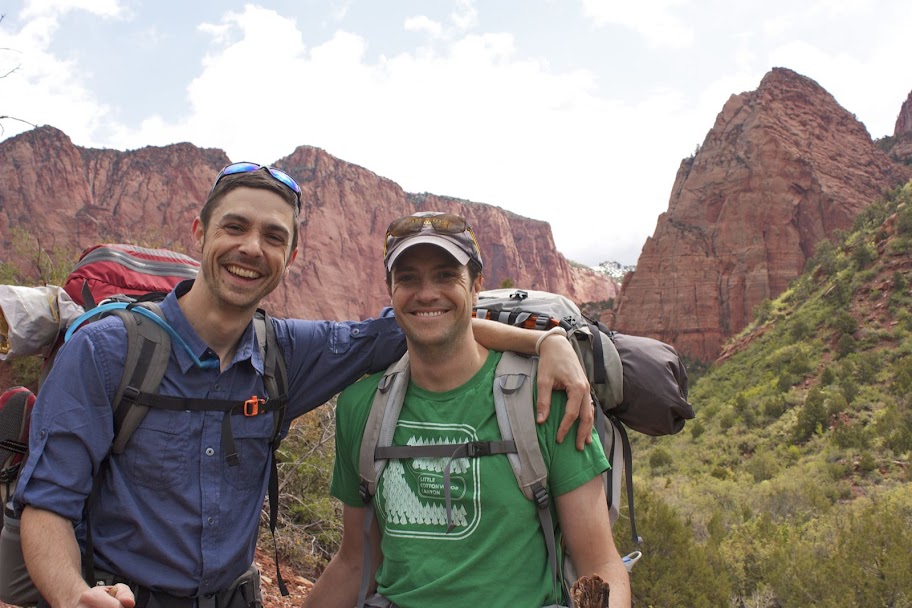 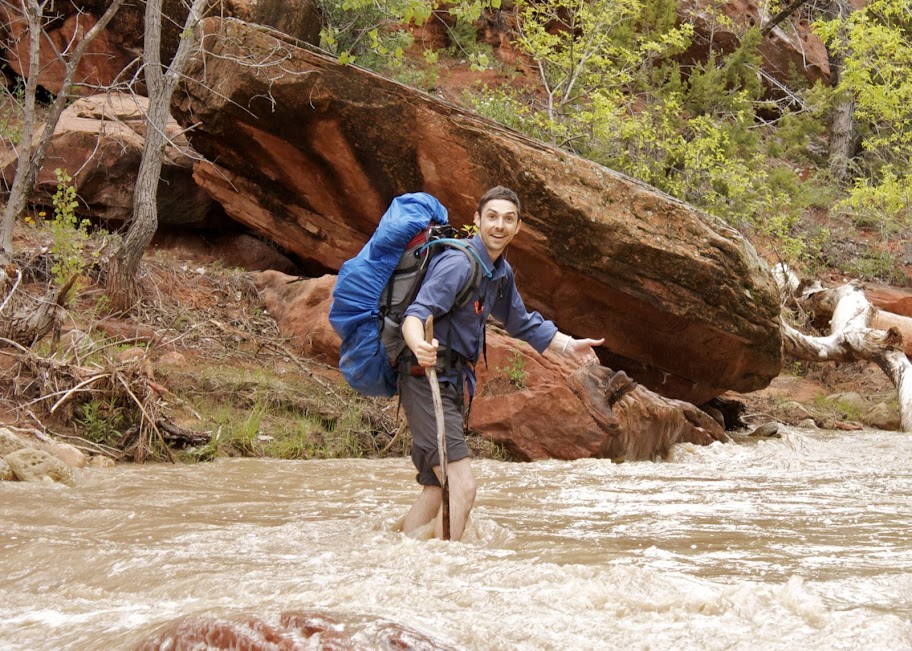 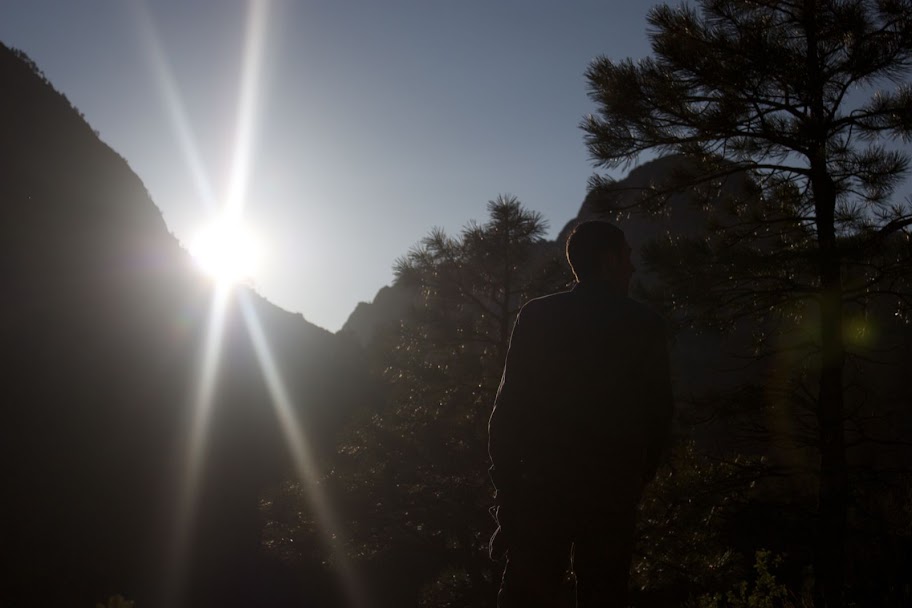 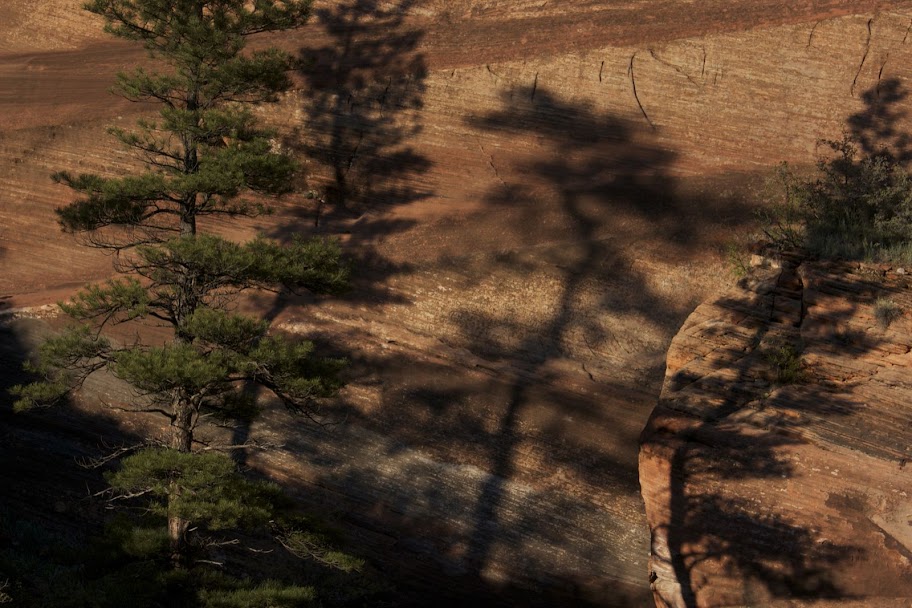 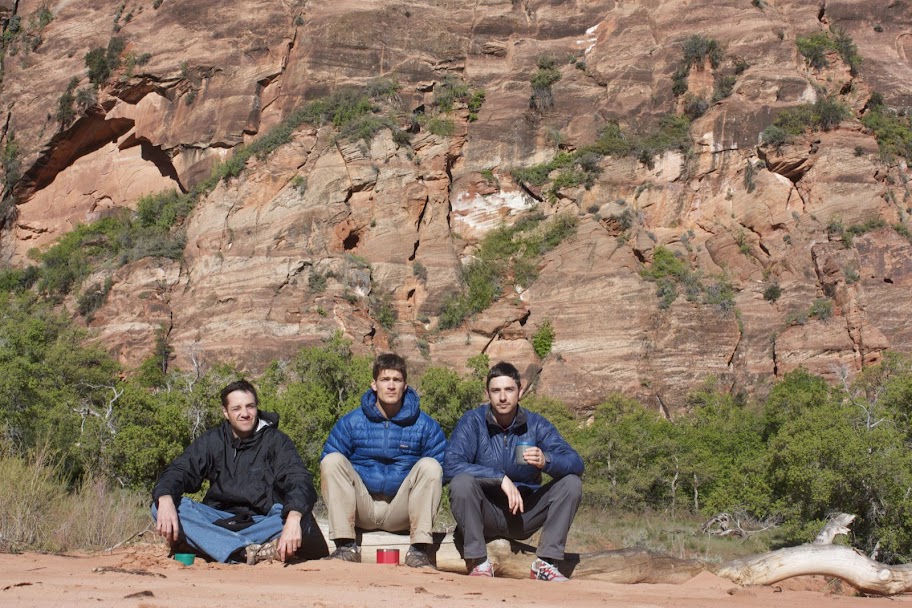 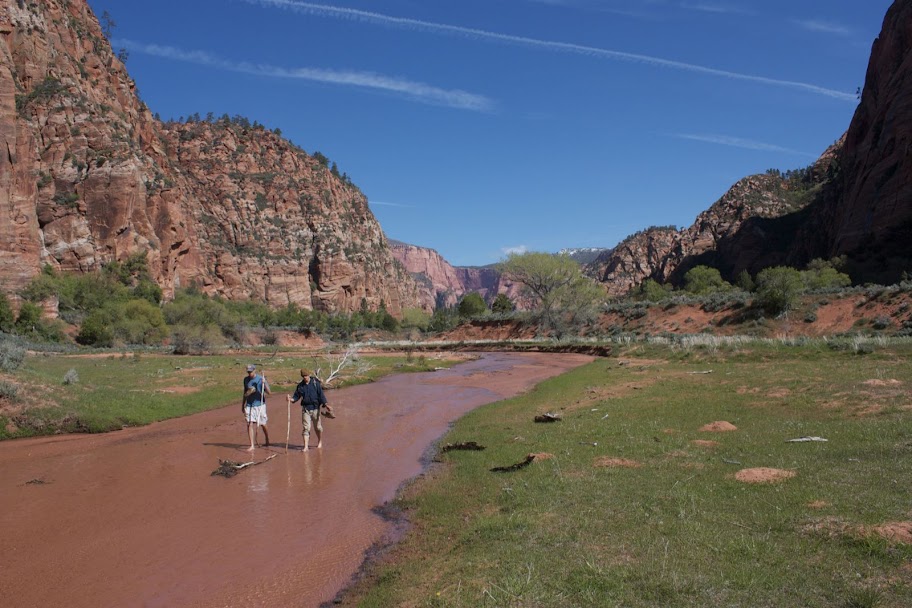 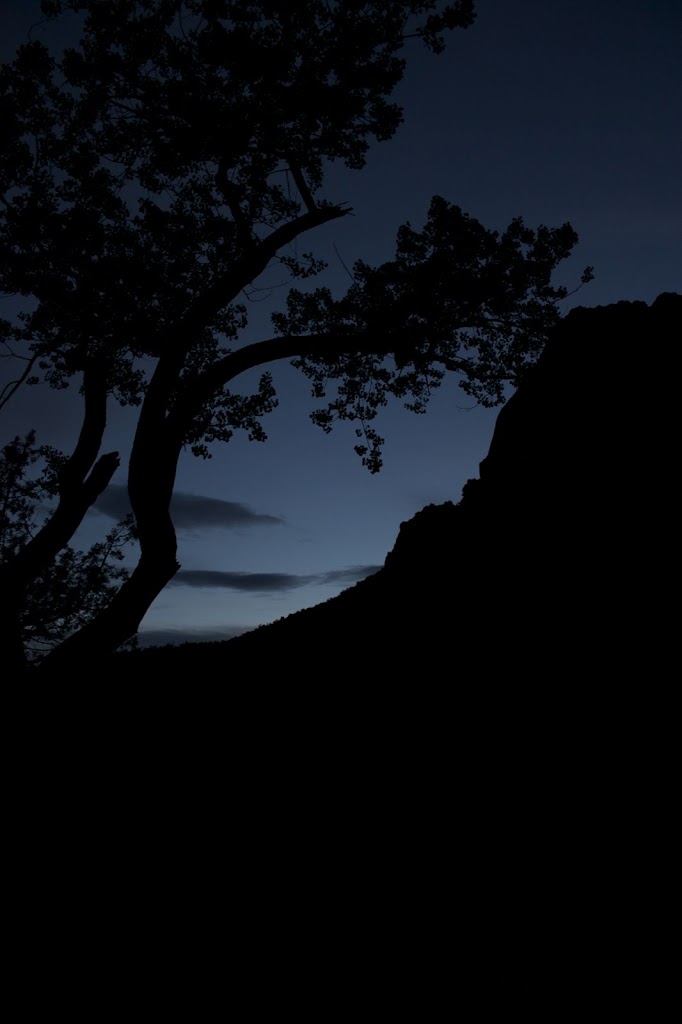 We went to Utah with little idea of where we were going to visit. In the weeks prior to our departure, the concentration was on Moab and Canyonlands (where I went two years ago with Lauren). We needed a trip that could be broken into two sections and one where we might be able to go between alpine and desert. We found all of it in Zion (just south of where we went last year). Matt and I arrived on Tuesday morning and headed to REI to seek out some professional advice on where to head. The store in Sandy, UT was less than helpful. The SLC REI has a desk devoted to public lands and would be your best bet for information.

Matt and I headed south in our rental car with hopes of getting some backcountry permits once we arrived at the Park. We ended up getting two nights, #2 in the Southwest Desert section outside the main entrance and #5 on the West Rim for Wednesday night. For the first night we drove out of the park through Springdale and out to the bridge over Coal Pits Wash. You can enter there and hike in the the SW Desert sites. We had a hard time finding the site and tried to use the canyons to guide us after we lost the trail. We did manage to spot two foxes along the cliff walls.

Wednesday morning we hiked out and back to the car. From there we headed back into the park and took the shuttle to The Grotto Trailhead. There we climbed the paved trail up to the split for Angel’s Landing and the West Rim. We continued toward the rim in the rain. Stopping under a ledge to make a hot lunch. The hike up the rim follows steep switchbacks on and next to huge stone walls where we started to see snow. Once on the West Rim we were trudging through mud and struggling to see past fog only to set up our tent while the snow began to fall. We spent the rest of the night in the tent, teaching Matt to play Euchre and listening to Bill Maher podcasts.

On our way down in the morning the weather cleared and we decided to make a go for Angel’s Landing. The view from the top was great as the sun was just breaking through the clouds in the south valley. As we headed back to the car on the shuttle we started to see the rain return. We used the rest of the day to knock out the Emerald Pool and Hidden Canyon hikes. By the end we were soaked, and headed to Cedar City to meet up with Dave who was driving down from SLC. We grabbed some Mexican food and a room at a cheap motel. In the morning we started to head up to the trailhead for our next two nights on the Virgin River Rim Trail. AS we started the climb out of Cedar City we soon realized that it was too cold and there was too much snow for us to make a go at the trail. We headed back to the Grind in Cedar City for some coffee and ideas for hikes.

We decided to head to the Kolob (K’lob) Canyon section in the northern part of Zion. We were able to get a horse camp site (A) for Friday night and site #6 on the way back to the car on Saturday night. The horse camp on Friday turned out to be one of our favorite sites. It is in Hop Valley, just after a turn off of the main trail and a river crossing. We had a ton of space at the site and we could explore in either direction down the riverbed that bordered the site. On Friday night we found a great perch to hang out on, and on Saturday morning we walked further up the valley. Those attempting the trans-Zion hike could continue through Hop Valley onto Wildcat and eventually to the West Rim and Angel’s Landing. While we took our stroll in the river up the valley, the weather finally broke. Up until this point Zion had felt like the Pacific NW, but on Saturday the skies were clear and bright blue. I think this spot was one our favorites on the trip.

To get to Campsite #6 in Kolob Canyon we had to cross the river once again and thought we had less space we had a lot of privacy. We spotted a small deer on the other side of the river as the sun set. The next day we headed back to SLC and spent a few nights with Liza and Ella. Seeing them was a great cap to the trip.

Throughout this trip my knees kept bothering me. Then for about an hour one day I was convinced that I was gonna snap my achilles. I was feeling older and vulnerable like I could have a physical injury out there that would delay, hold up, or make more challenges for the whole group. I also felt distracted. Perhaps because of the pregnant wife I left at home, or the work I could have done before I left home. It’s a terrible irony that it takes about 4 days in the wilderness before you can even begin to notice it. There’s a line in City Slickers where Curly snaps at the NYC execs who think they can come out to the range for two weeks and recharge their souls. I think of that sometimes when I get away from the city and how to create that distance more often, both physically and mentally.