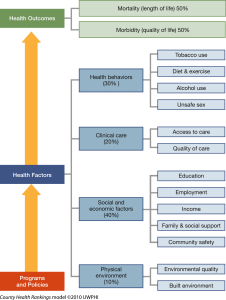 A couple months ago a listing of county health rankings was released. It was funding by the Robert-Wood Johnson Foundation and housed at the University of Wisconsin. It offers rankings for all the counties of a state based on one of two composite metrics: health outcomes and health factors. Outcomes focus on morbidity and mortality while factors consider social, environmental, and access components (see diagram). You can look at the data on any of the inputs for a single county.

The rankings compare only counties in a single state. So we can look at the counties that are relatively healthy in Georgia but they are not directly comparable to counties in the next state. They are based on America’s Health Rankings which does similar things to rank states. They factors included are meant to represent those which, if improved, will make that place healthier. You can use them to look at distributions within a state and begin to draw conclusions that way. Then you can compare those trends to other states. For example in Georgia you can see that the counties around the urban center (Atlanta) have relatively high health rankings compared to the rest of the state (Fulton and Dekalb are 24 and 17 of 157). However, for Michigan you can see that the urban counties are relatively unhealthy compared to the rest of the state (Wayne is 81 of 82). A comparison of the 50 healthiest and unhealthiest(?) counties in the country examined this question a bit more closely. They found:
healthier counties are urban/suburban, whereas least health counties are mostly rural. About half (48%) of the 50 healthiest counties are urban or suburban counties, whereas most (84%) of the 50 least healthy counties are rural.

In order to take advantage of the data and compare counties in different states I decided to take a limited sample of counties (ones where I have spent a fair amount of time) and look at them more closely and with respect to some easily obtained demographic data from the 2000 Census. The results are shown below. I need to do a little more digging in the data, but I hope to use this as a pilot study and to try and get the stats for a larger percentage of counties all over the country to look at this data.