I have been hearing, seeing, smelling, tasting a lot lately about bacon. It seems that there is a certain something about bacon that appeals to a lot of people. It’s a unexplainable feeling that’s visceral and which convinces us if bacon is good, more bacon is better. Similarly we also like to think that everything is better with bacon. I’d like to present a few examples. 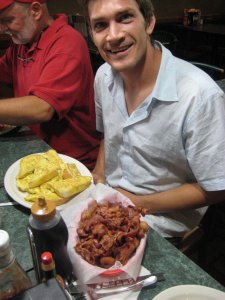 First, Tony’s side of bacon. On our trip up to northern MI we stopped at a Brich Run restaurant staple known as Tony’s. It is known for the huge portions and, in particular, their sides of bacon. Matt and I had heard about it all the way there from my mom and dad and it sounded too interesting to pass up. I think I have eaten there before but have no memory for these anecdotal events and a different taste in my mouth from those days to these. As we ordered I waited for the famous bacon to be added to someone’s meal or picked up as a side but everyone shied away from what had been the talk of the trip up there. I had to do it so I added a side of bacon to my order of french toast (see photo). It’s effectively a basket full of bacon, and by bacon they mean huge cuts of fried pig (no thinly sliced strips here). I got help from some of the others but we could not finish it.

Second, Camp Bacon. On the same trip we also visited Ann Arbor and stopped by one of my favorite place to eat, Zingerman’s. It’s more than a deli, more than a bakery, it’s a mailorder, publishing, olive pressing, cheese aging, explosion of taste. Anyway, they are celebrating the release of their newest book, Zingerman’s Guide to Better Bacon with a bacon extravaganza of sorts. They’re offering a number of bacon-enhanced recipes at their various shops and encouraging people to try them all in what they call the Tour de Bacon. This includes bacon scones and reduced price bacon add-on for any ice cream order. I trust their appreciation of food to do right by bacon but it’s still a shock to see it on some of these dishes.

Finally, the Bacon Explosion. I have only posted a teaser picture, please visit the website and look at it in all its bacony glory. I found out about it from a series of tweets by a friend of mine, Chad. He has recently come into a new smoker and is busy experimenting with the limits of what meats can do. The Bacon Explosion appears to be the epitome of bacon exuberance. Glutony is too simple a description, it’s the gastronomical equivalent of a Bernie Madoff-size ponzi scheme. Average people can only begin to imagine the limits of its wealth. You bring home a lot of bacon and then you bring home more and more. You revile it but you also want it. I imagine I could take about 2 bites but I have no idea what to expect with them.

I’m anxious to hear other bacon experiments and eccentricities as we continue to search the mysteries that are bacon.