Wednesday night I went to the second playoff game in the Atlanta Hawks’ series with the Miami Heat. Looking down from our $12 seats we felt like hawks perched on the side of building or the edge of a canyon cliff. As the Hawks were about to be introduced a real hawk flew through the space of the arena and landed on a corner of the jumbotron located in its center. This is standard issue for Hawks’ games. See the hawk with Dominique Wilkins and the the proud handler and the very jealous apprentice handler behind him. The Hawk even has a name (Spirit), a handler, and probably a steady diet of small mammals. It probably even goes through practice drills just like the team; fly to the jumbotron, head back to the handler, repeat. But Wednesday night something went wrong. After the lights were dimmed to call in the starters, Spirit went AWOL. The lights were brought up and Spirit was gone. Spirit returned about a minute into the game, swooping over the hardwood with incredible speed and grace. The refs had to stop the game as Spirit found a new perch on the backboard-mounted camera. Surprisingly, the refs and players continued to play until Spirit took another spin around the arena and over the fans’ heads, landing this time on the top of the glass. Then the handler came out and Spirit returned to his arm. 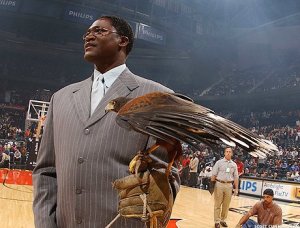 But that burst of freedom, an instance where Spirit truly lived up to his name, has earned Spirit the trendiest of administrative mandates, the furlough. Spirit has been suspended from duty for the remainder of the Hawks’ playoffs run. See the AJC’s coverage here. The article expands on the details of Spirit’s suspension saying that the hawk will be involved in the games but will not be flying during player intros.

Postscript: When I began to tell Lauren this story she jumped ahead of me and envisioned Spirit getting (literally) burned by flame shooting apparatuses (apparati?) that were going off while it was flying around the arena. This is a pretty wild image, bird of prey gliding near the heads of people while flames erupt from the tops of basketball hoops. Alas: the flames do not go off while Spirit flies.

One thought on “Spirit the Hawk”