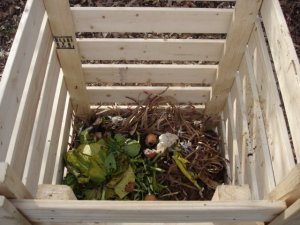 Our composting situation has been steady for over a year now but it has not been well developed. We saved our food scraps, put them in a bin outside and when that got full I would take it and add it to Rubermaid that I had in the backyard. I cut the bottom out of that so it was exposed to the ground. Twice, in a year, I took everything out of that and buried it in the ground, then I took that dirt and added it to the beds in the fall. I was not completely convinced that this was effective and Lauren hated it. I researched a number of designs on the internet but ended up creating a variation that was concocted on the fly.

So on Saturday (coincidentally Lauren’s birthday) Matt and I built a more substantial and appropriate bin. It gives us a lot more room to compost things and makes it easy to turn, plus it’s open to the air and water (rain). Lauren’s even showing some excitement. She read a book about compost and has been telling people about it. One thing we will definitely try to do is incorporate more yard waste. Before we were using mostly food scraps. Lauren learned that most cardboard can go straight in the compost and it’s really good for it. Now we shred toilet paper tubes and six pack holders and throw them in. It also gives me a reason to ask for paper over plastic. Finally, it’s an incentive to act on an idea I’ve had for a while, that is to make use of the masses of brown paper towel thrown away in the bathroom at school. We’ll see if I actually just bring what I use home or if I harvest from the trash can. Lauren also found out that if you have a wood-heavy pile you can urinate on it to activate. All of this has us both excited about composting.