A week ago I was in Washington DC, amidst the crowds, standing in the cold, taking in the excitement, putting my hands on the arc of history and bending it once more toward the hope of a better day (as someone once said). Before I took this trip most people wanted to know if I had a ticket and why I would want to go if I didn’t have one. First, when I showed up in Washington I did not have a ticket and I went to be part of one of the largest and most exciting events in the history of this country. Certainly since I’ve been around. You can be politically disinterested and hate on the new President but it’s hard to be human and not feel some bit moved by this election’s results. Nonetheless, I had little idea of what it was going to be like when I got there. Reports were flying around about how crowded things would be and how difficult it would be to move in the city, or to even get in the city.

I drove up to DC on Saturday morning with 3 others. Lauren had a good excuse for not going as she was getting in from Bangladesh that evening. We left around 6AM and arrived in DC before 4, having only hit traffic in Virginia due to an accident. I was staying with Vinay, a friend from growing up, on Capitol Hill. On Saturday night, Vinay and I met up with a friend from Georgia Tech for dinner and then headed to a house party. Vinay had heard about this party in a gutted two story building that had at one time been a church. Patrons were asked to dress up as their favorite religious or political figure and it was called the Church and State party. Our host was a vicenarian dressed like he was off to the yacht club in Caddy Shack. There were bands and sparse costumes but a keg of Delaware’s finest. One guy did a keg stand with it to which we cried blasphemy. Not completely satisfied with the gig, we headed to U street with Bill Frist (in complete surgical scrubs) in tow. We ended up that night in a long line at the famous Ben’s Chili Bowl. We were approached by a group of four who had just arrived Alabama to share a table and some conversation about our expectations for the rest of the weekend. 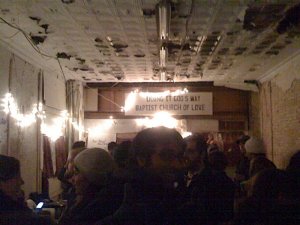 On Sunday I headed out for some coffee and stumbled upon the first of many markets set up to sell the Obama merchandise that had flooded DC. The town was a buzz with anticipation for what most were calling a concert. As with most things this weekend, there was a lot of speculation and little information. We showed up on the Mall at about 1:30 and could pick almost any spot we wanted between the Washington Monument and the WWII Monument. By 1:50 it was packed. The performances were aired for free via HBO. There were performances by too many celebrities to name here and Obama and family were there for the entire show. If you missed it the whole thing is available online for your viewing. My favorite performance was by U2 who sang their song Pride which was written about Dr. King. Bono improvised to say that MLK’s dream is a dream of all people, not only Americans. I also found the invocation by Gene Robinson particularly inspiring (transcript). Much better than the inaugural prayer on Tuesday.

The concert was the first real taste of the crowds and what it was going to be like on the Mall Tuesday. The atmosphere was amazing. People were smiling, cheering, dancing, singing. Everything was very positive. There was no pushing or shouting or arrests. It was exciting and energetic (the entire weekend was) and it had a great vibe. Another night of meeting friends for dinner and drinks followed.

Such meetups were by no means easy. The energy of the weekend had everyone on the edge of their seats and eager for spontaneity. Text messages flew and the rare phone conversations all ended the same; without plans firmed up and with an obligation to check in later once something was determined, which it never was.

The general hesitance to commitment that loomed over the evenings’ plans spilled over into my Monday morning. I had wanted to participate in a volunteer event for this National Day of Service but also didn’t want to lock myself into anything for fear that something else would come along. After an hour or two of reading and drinking coffee I agreed to meet some friends for brunch. I couldn’t find them at the place we decided upon but I ran into another friend instead. I spotted Brian (Hilary’s cousin) eating in the window of diner and stopped in to talk to him. It turned out that he was going to the same volunteer event that I had heard about. It was the city’s flagship service project being held at RFK Stadium. What’s more, his fiancee was asked that morning by a friend to emcee the event and so she got to introduce people like Michelle Obama and Nancy Pelosi as they stopped by. While in line at the event I met and chatted with another Georgia family who had come up from Macon. We put together care packages for troops in an assembly line fashion. Then I wrote some letters to go with the packages.

After the event, I convened with Brian, his fiancee, and friend’s from California at a local pub. As I often did during the weekend, I pulled out some food from my bag that I was always carrying with me. I had made cookies before leaving Atlanta so that I would have something to share with all the people I met up with. Little did I know that for her emcee work, Jama had been given a stack of purple tickets to the next day’s inauguration. After I gave her a cookie, she was kind enough to give me a ticket. I couldn’t believe it.

Tuesday morning I woke up early. I couldn’t sleep very well and once again was unsure of the plan. So I got up and headed out into the city to see what the vibe was. I had noticed on the way home the night before that National Guardsmen were now standing on almost every corner and in parks within ten blocks of the Capitol. I discussed with my other friends who had purple tickets to meet at the purple gate at 8AM. I got over there about half an hour early and went to what looked to be the end of the line. It turned out to be at the end of a street and soon there was no line just a street filled with people staring at the ‘Purple Gate’ up ahead. Check out my pictures with timestamps to see how we didn’t move for 3 hours but did see Jesse Jackson push though the crowd. For the most part, the mood stayed positive. A couple of times people did start chanting “Let us in!” but the chants quickly died. We began to move toward the gate around 10:30 and soon realized there was no one behind us anymore. Everyone had been entering through a small opening in the fences about 50 feet to the left of the banner labeling the gate.

I was now with a group of 3 new friends from California. We’d been standing in close proximity (touching) for three hours and they now saw me as part of their gang and they weren’t going to leave me behind. We finally got in and past security while the former Presidents were being introduced in the ceremony. You could see huge masses of people shut outside the fences. We later found out that many of them had the same purple tickets that we carried. 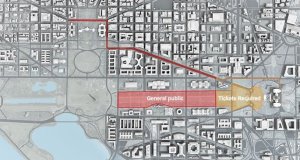 After getting back everyone asks me where I watched it from. Once inside the gates we made to the Capitol grounds and found a spot where we could hear well and see some of the screen through the trees. (in front of the top roundabout in the ticketed area on the map) I stood on the railing of a wheelchair ramp. You couldn’t hear it on TV but the entire crowd booed Bush when he was introduced and I felt bad for him. When Obama was sworn in people went crazy and screamed “YES!!!” It was in credible. When you turned around to look at the Mall you could see was a red and white flurry of waving flags for a long way.

I’m never completely wowed as I hear any speech. I need some time to read it and digest it. I love listening to speeches years later when they’ve had time to gather the dust of relevance (or the cobwebs of irrelevance). After the speech most people moved to the exists. Several lit up victory cigars. I parted with my new friends feeling encouraged that we’d all go out and try to do some good work. I think that’s the most important feeling I got from the whole thing. It was memorable and exciting and energetic but also inspiring and supportive while imposing a responsibility on me that I’m happy to take up. I feel like I need to go out and be civic, do good work, be the change I want to see in the world. I hope everyone came away from the inauguration with that feeling and not just one of Obamania; that the energy he creates can be focused on meaningful projects and ultimately on realized equity. I hope I can keep focused and determined to involve myself in good work.

One thought on “Inauguration”